The technique of liposuction was developed in the 70-th, for taking off adipose tissue from under the skin. The essence of the surgery is to take off the fat layer through a cut of a couple of mm.  A lead-in special canula (metal tube) is used to access the fat layer, which is then vacuumed out.

This method is not a slimming cure as is often though, and its result cannot measured by kg. The local and well-circumscribed fat-layers which sometimes are constitutionals and for women occur generally on the abdomen, hips, thighs, bottom and in some cases on the knees and for gents mainly on their belly as a swimming-belt.

These layers can be made to vanish by this operation. The results will be significant and are measured in cm. The number of fat cells do not change by a greater amount after our birth therefore their removal prevents, on the sucked-away area, the rebuilding of a new fat-layer, also the result is definitive.

The surgery can be done under local or general anaesthesia (narcosis).  Before doing it blood and urine tests and ECG control are needed. Under local anaesthesia not more then one or two not too smaller areas can be sucked away on at one occasion. Under narcosis, it is possible to take off layers from several areas, but the amount during these cases is also limited.

In our clinic, we have been performing liposuction for several years with the most advanced vibro-liposuction, vibrating cannula procedure. The American Micro Aire apparatus based on the PAL technique and used by Dr. Csuha is ranged to the best ones both with regard to its efficiency and safety of operation. The use of the apparatus is especially favourable for the typically more adherent tissue of male breast.

How long does the surgery and the following regeneration take?

Only the operation-the sucking-away- takes l5-20 minutes time for one area. Some more minutes are needed for giving the injections /for local anaesthesia /, disinfection of skin, turning etc. After an operation under local anaesthesia a half or an hour rest is advisable and then the institute can be left, preferably by car, but in no cases is the patient to drive. After a complete anaesthesia a one-night observation is important but the following morning the patient is able to go, but not again they way not drive.

Immediately after the surgery a compressing dress (garment) is pu 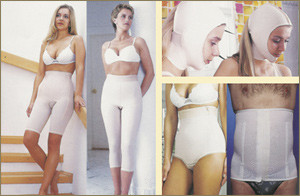 t on which for the sucked away area helps the adhesion of skin to its base. By this method the healing can be quickened. This special dress can be bought in our clinic and is advisable to choose it according to the measures of your body before the operation, as it has to be worn generally for six weeks. It has to be worn for two weeks during days and nights and after this period for 2-4 weeks more during the day only. The removal of the compressing briefs isn’t allowed for the first five days.

On the fifth day the patient may have a shower and remove it for a half an hour. Easy domestic works, office work and driving can be done after a 2-3-day long home-rest. In the case of a more extensive operation, this period will be longer: 6-8 days. Hard work, intensive sports, gymnastics, dancing, wider movement of the operated area have to be avoided. Later on there is no any limitation in the course of normal life and no harmful consequences will occur.

Pain: In the case of local anaesthesia before the operation the anaesthetic might cause some slight inconvenience, but after it can be felt only some local sensibility. For general anaesthesia there is no pain at all, but after the operation in both cases some blunt stiffness-like effects or burning aches may occur. With simple painkillers, sold without prescription, these can be stopped.

In every case some colouring with different intensity can be seen in the operated area or below it. / as after a strong blow / Generally this disappears after 2-3 weeks.

Swelling: Just after the surgery the skin turns into a strange wrinkled state. After a while tissue fluids collect which in some rare cases reach the amount of the sucked off fat. Similarly to the coloured skin this disappears in 2-3 weeks time. In most cases when one finally takes off the compressing dress these phenomenon can no longer be seen.

The cicatrices: For each local area only a, 4-5 mm long cut is needed and consequently such short and thin scar will permanently remain after. We endeavour perform these incisions so that they are possibly hidden and so don’t leave the impression of an operation scar.

What kind of complication might be caused by liposuction?

Discharge of blood (haematoma):  On the operated area this is very rare, it occurs in not more then 1-2% of cases. The sucking tube is so shaped that it cannot hurt any veins. Smaller bleeding can be well smoothed by icing but there can be hard points for some months on the operated area.

Inflammation:  More serious, needing medical intervention is very rare; its possibility is only one per thousand.

Diseased cicatrices, troubled wound-healing  The cicatrices are very short, and match without tense, tension ensure nice scar formation,  therefore there could only be any difficulties where the patient has a tendency for keloid-forming.

Troubles with skin-feel, numbness, insensibility:  The insensibility or trouble to do with sensation might occur only in 3-4% of cases. The definitive form is very rare but the whole regeneration needs a few month, in some cases more then a year.

Uneven or loose skin:  After the fat-removal the skin won’t be tighter. Because of this fact surgery is only suitable for those patients whose skin is flexible enough to be able to withdraw. In other cases a supplementary skin-tenser operation is advisable. The originally existing uneven skin or orange-skin in most cases won’t disappear after the operation.

Permanent colouring on the skin:  Some women who underwent a liposuction operation reported the colouring of the skin didn’t disappear totally for months after. However in these cases the colourings caused by bleeding were very dim and were apparent only in special light-reflection. This kind of discolouring also disappears after some more months.

Some useful advice after a liposuction procedure:

When there is significant bleeding under the skin it is possible to use icing 5-7 times daily, for 15-20 minutes long period. For this a welded milk-bag is practically the best but not frozen until it becomes solid, it must be taken out of the freezer and broken into a mush by hand, then wrap it into a towel or in a pillowcase and the dry pack can be put onto the area.

If the liposuction was done on the leg and in this area or around the ankle there appears swelling:

Take off the compression garment and lift the leg into a higher position. /For example against the wall/ then, after 20-25 minutes, when the swelling has lessened,  put on again the dress.

When showering the compression garment may be taken of, but the adhesive-stripe, which is on the scar, must not be taken off. The small gauze leaf can be thrown away.  It is less comfortable having the shower with the garment on, but in this case the gauze-leaf has to be taken off from under the briefs. The drying of the dress can be quickened, by using a hair-dryer.