Breast lift, i.e., restoring the original position, youthful shape and firmness of the elongated, sagging breasts for any reason, is one of the most frequently performed interventions in our clinic. The loosening of the connective tissue of the skin and, to a lesser extent, the loosening and regression of the glandular tissue play a major role in the development of the problem. The pectoral muscle has no role in this, and gymnastic exercises cannot, in the slightest way, as many people think, delay, stop, or reverse the sagging of the breast. For heavier, thinner-skinned breasts, wearing a bra on a regular basis can slow down this process.

Breast sagging most often occurs after childbirth and breastfeeding, because the skin – important for maintaining shape – extends and thins during pregnancy due to mechanical and hormonal effects, and is often accompanied by excessive regression and atrophy of the gland after breastfeeding. However, it is important to know that pregnancy rather than breastfeeding is responsible for the unfavourable changes in breast shape, so it makes no sense to give up breastfeeding – which is especially important for the new-born in the first few months.

Breasts can often sag without pregnancy with aging, or because of their weight in large breasts, but even at a very young age, due to the structural weakness of the connective tissue of the skin or as a developmental disorder in which sagging breasts develop asymmetrically. Many times, rapid weight loss causes loosening of the breasts, so it is important not to have a drastic diet and schedule it before, not after, mastopexy.

The essence of the surgery is to remove the loosened excess of skin, lift, cone-shape and fix the glandular stock. The weight of the breast does not change in this case, but if the breasts are disturbingly large or there is a striking difference between the two breasts, it is possible to reduce the size by removing a piece of glandular stock. It happens, and not infrequently, that the skin is loose, but there is hardly a gland to form. Since lifting alone would not give good results in this case, the glandular stock is replaced with a silicone implant and the suturing is performed in the same way, this is the implantation and correction in one session. Mastopexy alone results in similar scars on the breast skin to mastopexy with reduction or augmentation. It is important to know this because although these scars can ideally be quite faint, they remain permanent. The nipple is usually reduced proportionally, it will be more defined, sharp-edged, rounder.

There are three different kinds of operations, which result in slightly different scars: 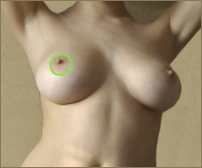 At this type of operation a scar appeares only around the nipple. 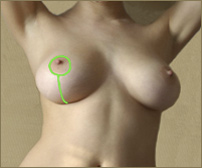 Result in a circular scar around the nipple and a vertical scar under the nipple. Lately this technique is used more often.

Disadvantage: At the vertical cicatrise there might be more problems with healing, the scar is temporary very wrinkled and becomes smooth only after 1-2 months. Also for the first couple of weeks, the shape of the breast is not final. 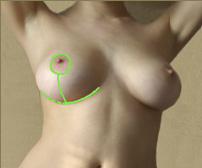 One around the nipple, one vertical under the nipple and one horizontal incision along the breast crease is made.

Advantage: This technique is well used for bigger breasts, the healing generally produces no problems and leaves thin scars.

Although in the case of smaller breasts the operation can be performed under local anaesthesia, general anaesthesia is most often chosen because it is more comfortable and safer for the patient. Before the operation a general health check, laboratory test /blood and urine test/ ECG are required. Breast ultrasound and mammography over the age of 35 are also needed to screen for possible hidden breast diseases.

The average duration of surgery is 1.5-2.5 hours. At the end of the operation, a bandage is placed on the operated area, which is made of impregnated sheet, gauze sheets, non-allergenic adhesive strips that fix the shape, and consists of a tight-fitting bra made for this purpose. In case of significant reduction, a thin plastic tube is led out of the wound, which drains the wound exudate, thus reducing the possibility of complications. This drainage is usually removed the day after surgery.

Usually, the ladies spend one night at our clinic, the next morning you can go home. It is advisable to travel by car, but you should not drive at this time. Driving is possible no earlier than 3-4 days after surgery. After the operation, approx. 7-10 days of rest at home is required, mainly in bed besides the utmost care. All physical activity should be minimized, even wider arm movements should be avoided. After 7-10 days, lighter physical or mental work, office work, etc. can already be done. In the first two weeks you need to come in twice for a check-up, then the seams are removed on the 12th-20th day.

Pain: Dull tension-like pain can be expected in the first 3-4 days, which is not unbearable and gradually decreasing in strength. Simple painkillers such as Donalgin, Cataflam tablets are effective. The mild itching sensation on the 4-5. day in the incision area is already a sign of wound healing.

Showering: The wound should not be exposed to water for five days. From the sixth day you can take a shower /not bath/, in which case the clean, even shampooed water flowing through the operated area will not cause inflammation. After a short shower, the area around the wounds should be gently wiped with a freshly ironed clean towel, a sterile gauze pad placed on the wound, and the bra taken back.

Two weeks after the breast lift surgery, the usual way of life can return, work can be resumed, and patients living abroad can travel home. For a few months, however, we still do not recommend intense sports, especially tennis, which requires wider arm movements, swimming, and exercises with more shaking, e.g. gymnastics, dance, aerobics, etc. For a few weeks, more caution is needed in sex life as well. Sunbathing, solarium for 4-5 weeks after surgery is not recommended and then the use of sunscreen is necessary for half a year. It is also important to wear a bra for another 2-3 months, but only during the day.

The durability of surgery can be adversely affected by various factors. Frequent weight changes, sudden weight loss, and smoking should be avoided. For larger breasts, it may be beneficial to wear a bra, if only temporarily. Therefore, re-sagging of the skin and thus another surgery can be avoided. Surgery, after a possible subsequent birth, does not affect breastfeeding ability in 95% of cases. However, after a new birth or births, the breast may sag again and require another corrective surgery.

Complications can occur with any surgery, including after mastopexy. These can result in more prolonged healing, more aftercare, and rarely require further surgery. Post-bleeding may occur in 2-3% of cases, inflammation even less frequently, and tissue death may occur in less than 1% of cases, which may be localized to adipose tissue or skin. Very rarely, partial or complete necrosis of the nipples can occur, which can be replaced with another plastic surgery. The chances of these complications are slightly higher with major breast reduction surgery. Abnormal scarring occurs in a few percent. Scarring is greatly influenced by individual predisposition. There may be several ways to conservatively post-treat dense, bulky surgical scars, and if they do not help a generally acceptable condition can be created with a minor scar correction surgery. Sensory disturbances can occur in 4-5%, in which case numbness and altered sensation appear in the nipple or the surrounding skin. In most cases, the temporary sensory disturbances disappear after a few weeks, less often the regeneration time is extended, it can take up to a year. For some types of surgery – especially facelift, tummy tuck, breast augmentation – it may be necessary to quit smoking even months before surgery.