Gynecomastia is a word of Greek origin, meaning the abnormal enlargement of the mammary glands in males. Most frequently gynecomastia appears on both sides symmetrically, but it may be unilateral in rare cases. The phenomenon is rarely associated with hormonal disease, even less often with a breast tumour in the background. It is important to screen these cases with preliminary examinations because their treatment is not the responsibility of the plastic surgeon. Most often, however, gynecomastia develops at puberty, on a genetic basis, or is associated with obesity. Bodybuilding supplements and muscle building steroid hormones also often cause such deformation in male breasts.

The spread of liposuction since the 1980s has brought a significant change in the surgical treatment of gynecomastia. The adipose tissue surrounding the gland is pre-aspirated through a tiny 2-3 mm incision, which greatly facilitates the removal of the mammary gland through the lower edge of the nipple. The incision later heals with a barely visible, thin scar. The skin is able to retract even with significant reduction, thus the skin incision with longer and more visible scars can be avoided – that is otherwise common in female breast reduction surgeries. Rarely, if breast enlargement is caused only by the accumulation of adipose tissue, which is mainly experienced in the case of obesity, good results can be achieved by using liposuction alone.

At our clinic, liposuction has been performed using the most modern vibroliposuction, vibrating cannula procedure for many years. Based on PAL technology, the American Micro Aire device is ranked among the best in terms of both efficiency and safety of surgery. In the case of typically more dense adipose tissue in the male breast, the use of the device is particularly advantageous.

How much time does the gynecomastia surgery and the subsequent regeneration require? 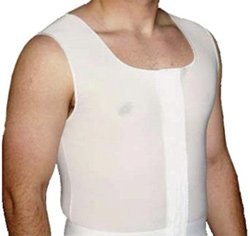 Immediately after the surgery, a special compression vest is applied to the treated area, which helps the skin retract to its base and thus speed up the healing process. This medical dress, which is available at our clinic, is selected before surgery because the right size is very important. The vest should be worn for an average of one to one and a half months, day and night for two to three weeks, and then only during the day for another two to three weeks. It should not be removed until the first dressing change, which takes place after six days. This is when the seams are removed, and you can take a shower afterwards. The vest can be removed for this half an hour. After a week of rest at home, light physical and mental work can also be done.

Heavy physical work, intense sports, gymnastics, tennis, swimming, especially wider movements of the arms and upper body, should be avoided for a month and a half. Later, there are no more restrictions, the former way of life can be continued, all sports activities can be performed.

What unpleasant symptoms are incidental to the gynecomastia surgery?

Pain: In each case, dull muscle soreness-like, less commonly burning pain may occur for a few days after surgery. The movement is uncomfortable, the operated area is stretched, and the vest is also quite tight. Simple painkillers available without a prescription are always effective

Haematoma, purple discoloration: Of varying intensity, purple or greenish-yellow discoloration often occurs in the operated area (similar to a stronger hit or injury). It is usually absorbed without a trace in a week or two.

Swelling: In the days after surgery, varying amounts of tissue fluid accumulate in the area of ​​the operation in the form of a slight swelling. Similar to skin discoloration, it is absorbed in a week or two. In most cases, by the time the compression garment is removed, these occurrences are gone.

Surgical scar: The two 2-3 mm long liposuction scars and the scar running at the lower edge of the areola heal in a few months with a barely noticeable thin scar.

Dense, thick tactile of ​​the surgical area: May occur in 10-20% after the procedure and may persist for several months.

What are the possible complications of gynecomastia?

Haemorrhage: Significant bleeding in the surgical area is very rare, occurring in less than 1%, because the special design of the suction cannula cannot damage larger blood vessels. Minor haemorrhages respond well to icing and creaming, but can sometimes cause a harder, denser, slightly uneven feel to the area that lasts for a few months.

Inflammation: Serious inflammation that requires intervention or surgery is very rare, with a thousandth probability.

Abnormal scar formation, wound healing disorder: Surgical scars are very short, they fit together without strain, therefore only individuals prone to keloid formation may have a scar formation disorder.

Skin sensation problems, numbness, insensibility: in 3-4% of cases, sensory disturbances or loss of sensation may occur in the surgical area. Their final form is very rare, but total regeneration can take more than a year.

Skin unevenness, skin looseness: The skin of a gynecomastia breast is usually flexible enough to allow it to retract completely after surgery. Minor unevenness of the skin surface is a rare problem in the male breast. With the introduction of the vibrating cannula, its incidence was significantly reduced. It can be treated well with a vacuum massage (ENDERMOLOGIE).

Permanent discoloration of the skin: Very rarely, patients who have undergone liposuction report that the discoloration caused by the bleeding on the skin of the aspirated area does not disappear completely even after a few months. In these cases, too, it is only very faint, in certain light conditions the colour difference is visible, and generally after a few more months it will disappear completely.

Nipple pigment deficiency: In the area of ​​the nipple above the incision, a few% of cases may develop a lighter pigment deficient spot, which usually darkens after a few months and the nipple regains its original colour.

Nipple area sagging: Also, in a few% of cases there is a slight sagging of the nipple area which will fill up in the following months and the skin surface will become even.