As we are get older our skin changes with us. During this course the amount of Collagen lessens and so does the number of elastic fibres and the ability of water containing. So with quite individual speed the face diminishes in tension and becomes flabby, starts to loosen. As the time passes more and deeper wrinkles develop. The face becomes older by changes of the deeper layer under the skin too. This is the result of years of gravitation on the muscles of mimicking, on the connective tissues, and rolls of fat.

Slackened skin on the face can be treated by face plastic, and the ongoing process of loosening of skin can be slowed down by lifting back the inner layers onto their original places, with these techniques it is possible to achieve a 10-15 years younger face. Beside the traditional face-lifting operation there are several other techniques or supplements with which the results are better. Such as these are chemical or laser peelings, wrinkle filling with injections and Botox treatment. The classical face lifting surgery is performed with a long cut, which starts at the forehead and runs around the ear, closing to the occiput. The skin of the face and of the upper neck is undermined until the smiling-wrinkle and after the lower has been tightened, the skin is pulled upwards and backwards and of course the excess skin is cut off.  The fat from the double chin will be removed by liposuction technique. The scar, which came into being, can be partly hidden by hair but around the ears it is so thin so that it is hardly noticeable. The effects of the operation are mainly on the right and left sides of the face close to the smiling wrinkles and on the upper third of the neck’s skin, but this procedure doesn’t  effect  the area of the chin and lips. Here wrinkle filling and laser peeling are usable as complements to the intervention. The area of the temple becomes smooth but the eyelids and wrinkles on the forehead need another operation. The smiling-wrinkles cannot be made completely smooth and the very deep wrinkles will remain. The effect of this kind of operation is apparent for 6-12 years but can be repeated a few times. 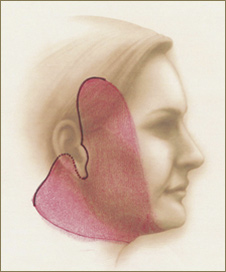 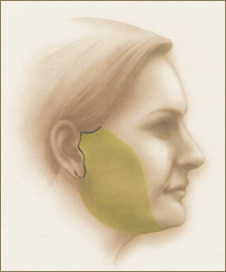 Instead of classical face-lift operation it is possible to perform, according the needs, smaller interventions, a so to say „mini-face-lift operation” which consist of shorter cuttings from the line of ears and mainly at the line of chin and at the line of upper neck. Excellent results have been reached and the patient’s burden is less during the operation, there is less chance of complications and it is important to note, the recovery time is shorter. On some surfaces, mainly on the forehead, an excellent result can be reached by a very short cut, using an endoscope. Apart from these there are operations at the lifting of the very deep layers, the subperiosteal liftings, where there are really spectacular results but also the chance of complication has a higher rate and the time of recovery is sometimes longer.

The mini face-lifting operation is typically done at about the age of 40 years. The conventional, or classical face-lifting operations are mainly done at age of 50-70 years. There is not an upper age limit, but a good general health condition is required! Most common risk factors are a not well-regulated blood pressure and diabetes. These can easily lead to complications. The same applies to smoking, depending on the smoked amount the risk can be higher. The intervention can only be done if the patient stops smoking several months before the operation.

The operation is commonly done under local anaesthesia, but it is also possible under general anaesthesia. Blood and urine test are to be done, sometimes ECG checking as well. In the case of local anaesthesia this is done in ambulant, that is to say, the patient, after the operation, having a few hours rest, can go home. If one has a general anaesthesia, it is required to stay in the clinic for a night. A thin, plastic drain is put into the wound that drains out the mucus, which is normally generated there, but this tube will be removed in 24-48 hours time. A tight bandage covers the head for two days and it allows only the face free, as a crash helmet. After two days, another looser bandage will cover the head for a week time.

During the first day tumescence, colouring around the eyes or haemorrhaging might occur. During the first weeks, while touching the operated surfaces, rather harder points might be felt. After the 7th-8th days is passed, wearing the bandage isn’t needed anymore, the hair can be washed, but the stitches will only be removed at the 10th-14th day. It is advisable to spend this time at home resting. Two or three time during this period the patient has to visit the clinic for checking and bandage changing. It is also advisable to keep the head higher by pillows when lying in the bed and consume only semi-solid food / easily chewable/. Strictly forbidden are any such activities, which grow the blood pressure. / Bending, lifting heavy objects, hard physical work or sport /. Any kind of activities are forbidden which cause any reddening of the face such as sunbathing, /solarium/ any strong warm radiations, hot, very spicy dishes, alcohol. Hair dyeing, make up is possible after the third week, sunbathing, solarium after the 6th-8th week.

After face-plastic surgery serious complications occur very rarely. Less serious problems can be treated with suitable intervention. These commonly don’t affect the last results of the operation. Occasionally there might be in 4-5 % haemorrhage, temporary loss of perception. These cease in a couple of months. Necrosis of skin is also possible in not more then 1 %, behind the ears. Inflammation is almost impossible as the blood supplying the face is very efficient. Long lasting tumescence or oedema also isn’t significant. If there is thick cicatrice, or falling hair, or the hair is getting thin near the scar, that can be corrected by an after-care. In 0,1% of cases it is possible that a branch of facial nerve could be damaged which would cause asymmetric moving of muscles in the face.